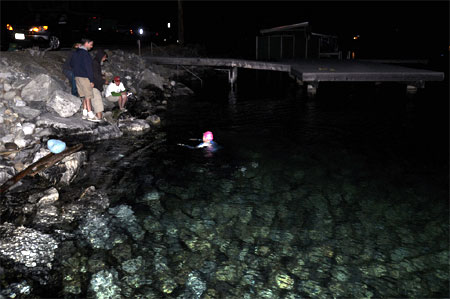 At 3:51 am PDT, after 36 hours of battling winds, waves, sleep depravation, and the cold waters of Lake Chelan, Emily von Jentzen swam to shore in Chelan, WA and became the first person to swim from Stehekin to Chelan.

At around 9:30 PM last night, a group of fans gathered at Willow Point Park to cheer Emily on as she rounded the bend exposing Manson Bay and Wapato Point.

"We saw her go by the Willow Point area about 9:30 this evening! How exciting and unbelievable. We struggle through the straits in a boat with high winds, and we've had high winds today. Can't imagine swimming this lake--what a brave woman. Three cheers for Emily and Katelyn!!" said Hannah Hubbard.

You can see the path of her swim with dates and times by CLICKING HERE.