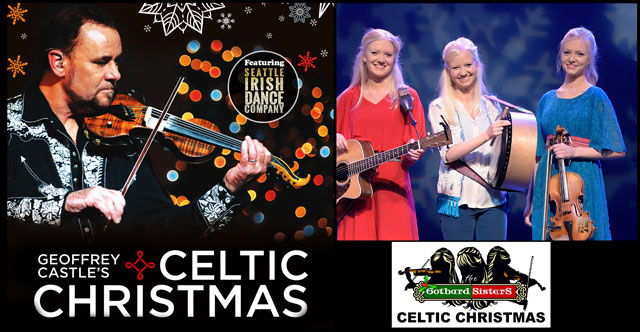 His Second Year in the Lake Chelan Valley, legendary electric violinist Geoffrey Castle brings the Christmas magic with this dazzling concert, featuring the Seattle Irish Dance Company, The Geoffrey Castle Celtic Band, and known Irish troublemaker and Tenor, Dan Connolly. This year's special guests, Seattle Opera’s own Pamela Cassela-Nim & Veronica Nim, and even a visit all the way from the North Pole by the Chief Elf himself and his wife - Santa Claus & Mrs. Claus.

Now in its 14th year, Geoffrey Castle's Celtic Christmas Celebration has become a Northwest Holiday Tradition, bringing communities together to celebrate the magic and mystery of the season, with an Irish flair for fun!

Geoffrey Castle is a living legend on the electric six-string violin. His performance history includes playing music with members of supergroups like Heart, Queen, Journey, Bad Company, YES, Alice in Chains, Soundgarden, Blues Traveler, the Pogues, and the Neville Brothers, while releasing 12 albums on his own independent label and touring and performing all over the world.

The Seattle Irish Dancers are the only professional performance Irish Dance Company in the Pacific Northwest. They've performed with musicians from around the world - Gaelic Storm, The Chieftains, and Celtica Pipes Rock - to name just a few. They perform often with Geoffrey Castle and are excited to come back to the Lake Chelan Valley.

This year Lake Chelan Christmas™ adds a second Concert, The Gothard Sisters Celtic Christmas. Christmas with the Gothard Sisters is a special holiday program featuring Celtic tunes and songs as well as the sisters' joyful and sincere arrangements of Christmas carols old and new. This familyfriendly show includes sibling harmony, Irish step dancing, the sisters' signature humor and heart, and even a Christmas Eve disaster story.

The Gothard Sisters are a dynamic musical group of three sisters who play contemporary Celtic music. Through 10 years performing, touring and writing music together, the optimistic style of their music and performances continue to resonate with their fans, building a loyal international following. Their latest all-original album release, Midnight Sun, reached #6 on the Billboard World Music charts as the highest ranking debut on the chart, and the Gothard Sisters have performed in venues large and small all over the country, including a concert at the Kennedy Center's Millennium stage in Washington DC, performances with Disney Cruise line in Europe, a 21-city concert tour of Japan in 2019, music festivals and performing arts venues nationwide. Blending Celtic, folk, classical, world and northwest musical influences, the Gothard Sisters bring songs to life with violin, acoustic guitar, mandolin, bodhran, djembe, octave violin, whistle and vocal harmonies, creating music that is "vivid, inspirational and captivating." (Tim Carroll, Folk Words Review 2018)

Writing and recording near their home in the Pacific Northwest between touring nationally, the band has released 7 albums and has performed over 1,000 live shows over the course of their career These productions are brought to the Lake Chelan Valley by the Lake Chelan Tourist Center in is efforts of creating Family Friendly Community Events & Entertainment. This Year Lake Chelan Christmas™ is part of the CHRISTMAS IN WASHINGTON™ Concert Series providing Christmas Concerts in Lake Chelan, Leavenworth, Ellensburg, Moses Lake and Omak. Pre-Concert and Intermission Entertainment provided by the Official CHRISTMAS IN WASHINGTON™ Celtic Bagpiper David Wilkie.

Refreshments available for purchase before the Concert and during Intermission as a Fundraiser for the Chelan High School Drama Department.

Full Details and Online Tickets at:

One of France’s most popular plays, this fast-paced 1960s romp is just the ticket to kick off a big year for Music Theatre of Wenatchee, which includes the return of the MTW Apple Blossom show, Mary Poppins, to the Numerica PAC.
Winner of the 2009 Tony Award for Best Revival of a Play, hilarious "Boeing Boeing" is a farce, focussed on Bernard, an American who’s devised a foolproof plan for keeping his love life in Paris exciting. He has three flight attendant fiancées and a bedroom for each. What could go wrong? Everything!
Eventually, Bernard and his American friend are left desperately seeking an emergency exit as his fiancées all come in for a landing at the same time.
The "Boeing Boeing" cast includes both MTW veterans and new faces, and director John Mausser says energy is "sky high," as Kevin McKee, Matthew Pippin, T.J. Farrell, Tiffany Mausser, Tess Davison and Becca Chambers surge headlong into hilarious hijinks.

Admission: Tickets at www.NumericaPAC.org or at (509) 663-ARTS • $15 regular admission • $12 for MTW members for Thursday performances 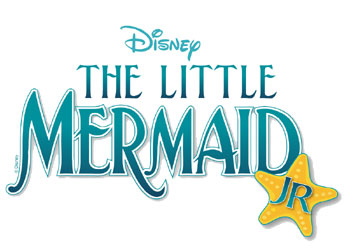 Bring the whole family and go Under the Sea with StageKids as they present Disney's classic tale of a young mermaid and her adventures to find love on land.

Now you can be part of Ariel's world when Stage​ ​Kids W​A​, in partnership with the Numerica Performing Arts Center, and presenting sponsor, McQuaig and Welk, PLLC, present the musical, "The Little Mermaid Jr.," running Dec. 3-5​.​

Princess Ariel spots a human and falls in love. But not just any human -- a prince! The mermaid strikes a deal with a wicked sea-witch and leaves her ocean home for dry land.

Armed with a “dinglehopper” hairbrush, and with the help of her feathered and finned friends, Ariel follows her heart to win over the dashing Prince Eric.

The one-year-old youth theater program, Stage​ ​Kids W​A​, presents the musical version of the childhood story, based upon the 1989 animated Disney film. A youth cast of 52 actors from 19 local schools, will don more than 500 costume pieces to re-create the beloved tale.

“​Working with this community of talented kids and their parents has been a joy,” says StageKids founder and show director, Michelle McCormick. “Together we've created a beautiful show and memories that will last a lifetime.”

Don't be the poor unfortunate soul to miss out on this one!

Tickets are available at www.numericapac.org — $15 for adults and $12 for children. 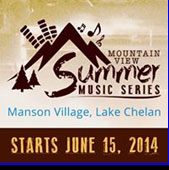 Five of the eleven concerts at Leffler Field (next to Mountain View Lodge) in Manson are in the history books. The event has been a wonderful experience for those in attendance but we are concerned about the lack of local participation.
There are several reasons Sundays were picked for our concerts. First we hope to have folks stay over one extra day, which means more hotels, more food and more wine. Also we didn’t want to be in competition with local businesses and their events. And we wanted to offer our locals something to do on Sundays, usually a dead day.
We have also offered local non-profits and community groups the opportunity to make money for their organization. We call these groups “Partners” and they can make some serious money for their cause. For each ticket our Partner sells they receive $4, half the ticket price. So if you have an organization than would like to raise money please contact us 509-293-0225. So far we have had the Manson High School Class of 2015, Chelan Valley Hope and this week North Shore Bible Church.
We have a great show for Sunday, July 20th starting at 7:00.
Our Opening Act is Tim Snider and Caio AndreattaSnug - Unbridled energy, intensity, and musical eclecticism! Tim Snider plays and loops the electric violin, guitar, cajon, and vocals creating aural landscapes that are forceful, confessional, and raw. Coming from Reno, Nevada, Tim picked up the violin when he was just three years old. Over the years, exposure to rock music, songwriters, like Ben Harper and Paul Simon, inspired him to play the guitar. His sojourns in Spain and Cuba introduced flamenco, salsa, and Afro-Cuban rhythms into his repertoire. His music can be described as a world-folk-rock hybrid that is aimed at the heart, the brain, and the feet.
Snug Harbor, our headliner is a 9 piece funk-soul revival group, tucked away in the corner of the Northwest in the city of Bellingham, WA. From original compositions to classic covers, Snug Harbor is raw,high-energy soul musicand each live show contains elements ofimprovisation over heavy funk grooves. After six years of recording, performing, and touring this band has really hit its stride. In 2014, with the addition of three new members, Snug Harbor has been regarded as a top performer in the contemporary funk and soul market. Follow them online to find out more information on music related releases and tour dates.
Besides all the great music you can park for free at Leffler Field. Tickets are only $8 and remember $4 goes back to our community. You can enjoy our beer and wine gardens and each week we have different food, hamburgers, subs, etc. Also snow cones and popcorn are available. And there is more!!!!! We have a drawing each week for some pretty neat prizes.
So please join us and support your community. Tickets can be purchase at many local businesses including the Chelan Chamber of Commerce. You can purchase tickets online or at the gate.
More information visit our website or call Norm Manly 509-293-0225.

Whether you live in the Chelan Valley or on the west side of the mountain this post is for you. Concert #1 of theMountain View Summer Music Series will be on Sunday - June 15 from 7:00 to 10:00. This is a new event for Manson and it is shaping up to be a super fun time. I now have tickets, only $8 for 13 and over and free for 12 and younger.
Opening band for the June 15 concert is Sammy Witness & the Reassignment with the feature band Cody Beebe & the Crooks.
There will eleven concerts this summer and you can learn more or purchase tickets atMountain View Summer Music Series.