On August 18, 2021 Governor Inslee announced that Proclamation 21–14 (Vaccination Requirement) had been expanded to include all employees, on-site contractors and on-site volunteers at all public and private K-12 schools.

After many discussions with the School Districts, the Sheriff’s Office, the Deputy Sheriff’s Association and each SRO, it was determined that the contracts would be put on hold, in order for all those involved and potentially affected by the Vaccination Requirement to work through this process.

The Chelan County Sheriff’s Office values the working relationship we have with our School Districts, their administration and staff. Together with our School Districts, the Sheriff’s Office administration, staff and School Resource Officers, we have worked collaboratively in order to provide programs that foster a safe learning environment for both students and staff.

Sheriff Burnett is working closely with the School Districts, Sheriff’s Office Employees and the Chelan County Deputy Sheriff’s Association in hopes of finding a resolution, while at the same time giving due process to all those potentially affected by the Vaccination Requirement.

In the interim, the Chelan County Sheriff’s Office is committed to keeping close communications with our schools and providing the best service possible under the current circumstances. The Sheriff’s Office will respond to all non-emergency and emergency calls for all schools and we will continue to work proactive patrols around our schools in order to maintain a safe learning environment for all.

Sheriff Brian Burnett reports on August 20th, 2021 at approximately 4:30 pm a 78 year old Peshastin man was located on the French Creek trail in the Icicle Drainage. The man was reported missing on Monday, August 16th after he didn’t return home from fishing on Sunday the 15th. Searchers worked all week attempting to locate the missing man.

On August 20th, a group of hikers located the man on the trail and flagged down a search team in the area who were returning to the SAR base. They were approximately 2-1/4 miles in from the trailhead. He was dehydrated but was still able to walk. It was determined on scene however, he would need to be littered out the remainder of the way.

After interviewing the man, searchers were able to determine he hiked in on Sunday morning and went up the French Ridge trail off of French Creek. At some point, he lost the trail and started working his way down off trail. He located the creek and was able to catch and eat some fish. 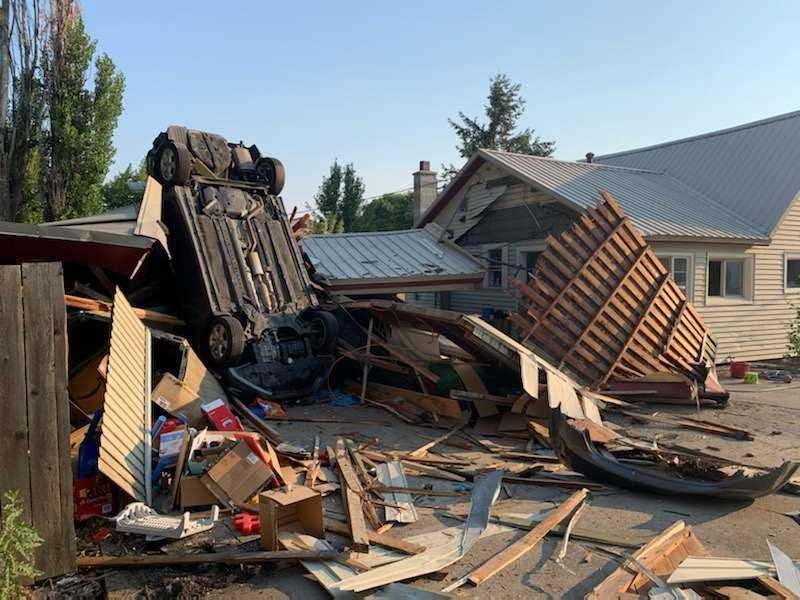 Chelan County Sheriff Brian Burnett today provided a summary of an incident over the weekend related to a stolen school bus vehicle and how law enforcement’s response was dictated by new Washington state police reform policies.

On Saturday July 24 at 1940 hrs. employees of Osprey Rafting witnessed a man wearing a yellow dress drive away in the company’s privately owned large yellow school bus from an area east of Leavenworth on SR 2 (milepost 102). Sheriff’s deputies responded and located the vehicle driving eastbound near milepost 111, and witnessed the vehicle running a red light near Monitor, WA. They tried to initiate a traffic stop but the bus did not stop. Washington’s new police reform laws no longer allow law enforcement to pursue a fleeing vehicle unless there is probable cause that a serious felony (see the 4 required elements below) has occurred so the deputies had to abandon the pursuit.

Douglas County Sheriff’s deputies followed the vehicle eastbound on SR28 after it traveled through the city limits of Wenatchee and across the Senator George Sellar Bridge. They also discontinued pursuit per the new reform laws.

On Saturday July 25 at 1853 hrs. Chelan County Sheriff’s Office was contacted by the Chewelah Police Department who indicated they believed they had the driver in custody. His identify was verified by Chelan County deputies and he was wearing the same yellow dress.

Thirty-nine-year-old Andrew S. Loudon allegedly stole a front-end loader and drove it through his home in Chewelah. The suspect’s wife had fled the home when she learned her estranged husband may be nearby.

Initial reports indicated that Mr. Loudon was released from Western State Hospital. Further into our investigation we have determined this information to be inaccurate and that Mr. Loudon was not at Western State Hospital, but at a privately run mental health hospital within Western Washington. Mr. Loudon was released Friday, July 23rd from the mental health hospital and transported by private vehicle to a local hotel next to a bus station where he would catch a bus to travel back home the following day. Mr. Loudon did board that bus bound for Eastern Washington and made the decision to disembark in Leavenworth, WA.

He is being held on charges of Theft of a Motor Vehicle, Possession of a Stolen Vehicle, Malicious Mischief 1st degree/domestic violence and Attempting to Elude Police Vehicle.

How this incident highlights changes in police response:
The new law sets very strict guidelines for law enforcement that takes away our ability to pursue stolen vehicles. It states four elements are required for law enforcement to pursue a vehicle:
1. Probable Cause for a VIOLENT OFFENSE, SEX OFFENSE or ESCAPE (from custody or detention facility) or reasonable suspicion for DUI
2. Pursuit is necessary to identify or apprehend the person AND
3. The driver possess an imminent threat to the safety of OTHER S, AND the risk of failing to apprehend or identify the person is greater than the risks of vehicle pursuit AND
4. Supervisor has provided authorization.

If these four prongs are not all met, we as law enforcement cannot pursue vehicles in Washington State any longer.

On July 14, 2021 the Chelan County Sheriff’s Office executed a search warrant at a Monitor, WA residence that was believed to be the origin of the Red Apple Fire.

During the investigation it was determined that the fire did not originate at this location and investigators were lead to an adjacent propertyapproximately 50’ from the residence.

Investigators have determined that the fire was man-caused, but it is unknown how the fire started.

This investigation was conducted by investigators from Chelan County Sheriff’s Office, BLM, and DNR and continues to be an ongoing investigation.

Cause of Red Apple Fire under investigation

On July 13, 2021, at 6:55 pm, Rivercom dispatch center received a report of a grass/brush fire in the area of the 3300 Block of Red Apple Road, located between Monitor and Cashmere, WA.

With the fire quickly spreading, Chelan County Sheriff’s Office and other agencies assisted with traffic control and emergency evacuation notifications.

The Chelan County Fire Marshall responded to investigate, in order to determine the origin and the cause of the fire.

UPDATE : 7-14-2021 – With approximately 7000 acres burned and 1500 homes under evacuation notifications, Chelan County Sheriff’s Detectives assisted the Chelan County Fire Marshall and BLM Fire Investigators in writing and executing a search warrant at a nearby residence believed to be the origin of the fire.

At the time of this report, detectives and other investigators are actively investigating the case. Information will be updated as soon as possible and as the case investigation allows.

Although this case may have appeared to stall, the team of Detectives worked on leads and tips in order to make this arrest. A total of 21 search warrants have been served throughout the investigation.
Even with the arrest of Ceballos, this case is still under investigation. The team of detectives are continuing to seek information relating to this incident. If you have any information related to this case, please call 509-667-6845 to leave a message for a detective.

Sheriff Brian Burnett reports On May 25th, 2021 a burglary was reported in the 3200 block of Rivers Edge Place in Wenatchee. The reporting party stated they believed their home was broken into sometime prior to noon that day. Several items were taken from the residence including a laptop, tablet, clothing, and firearm. The suspect also left behind articles of wet clothing.

Early on May 26th, the burglary victim reported receiving pings from their stolen tablet in the north Wenatchee area. As Detectives investigated this, they began to link the burglary to a subject who had fled on foot the day prior after a fire started near a homeless encampment along the Wenatchee River. This was in the vicinity of the burglary. The wet clothing left at the burglary matched what the subject was wearing when contacted by law enforcement.

Through interviews, they were able to determine he was associated with a Red Jeep Cherokee. CCSO Deputies and Detectives followed up on several Pings throughout the morning and eventually located the red Jeep parked on North Wenatchee Avenue near Walnut Avenue. Along with Wenatchee Police Department, they took the suspect, a 32 year old Wenatchee man into custody at approximately 11:00 am today. He was located with some of the stolen property from the burglary.

CPR was administered by fellow parasailers until medics from Cascade Medical Center arrived on scene. Unfortunately, lifesaving efforts were unsuccessful and he died from his injuries. The victim was later transported out of the area by the Chelan County Sheriff’s Office helicopter.

The identity of the victim is being withheld to allow time for family members to be notified.

Suspect in custody for multiple crimes including kidnapping

The crimes were believed to have been committed throughout the evening of January 21st into the morning of January 22nd, 2021. It is believed the victim was held against her will and was assaulted multiple times in the Wenatchee area and during a drive to and from Ellensburg.

U.S. Marshals received information Mr. Whitman was staying in an abandoned trailer off of Tarpiscan road south of Malaga. Further investigation led the Task Force to believe the trailer was approximately 1.5 miles south of the end of the pavement on Tarpiscan road. They were able to conduct surveillance on the trailer and a plan was developed to place resources in the area. WDFW Officers transported a team to the area by boat on the Columbia River and a team went in on the ground as well with CCSO K9 Asa.

At approximately 2:30 PM Mr. Whitman was seen walking away from his trailer. The ground team was positioned to where they were able to intercept him and take him into custody. He has been booked into the Chelan County Regional Justice Center.

The other escapee, Christian White was apprehended in the Portland area on Tuesday.