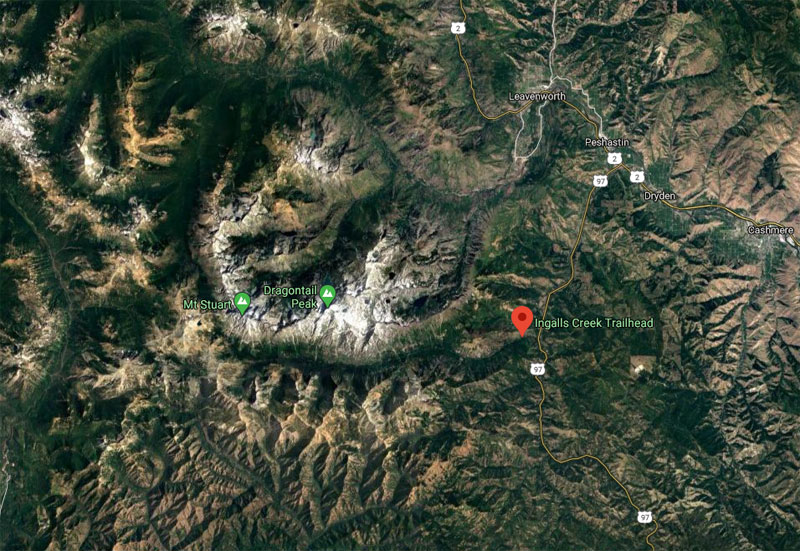 WENATCHEE, WA - Sheriff Brian Burnett reports an injured hiker was rescued Sunday after suffering a fall while hiking in steep terrain above Ingalls Creek on Saturday afternoon. Tristan Parrish (22yoa) of Leavenworth, WA is in serious but stable condition at Central Washington Hospital.

Parrish was hiking with his father, brother and a friend at around noon on Saturday when he fell approximately 50 feet after slipping on slick rocks. The group had been traversing a steep slope east of the Crystal Creek drainage (above Ingalls Creek) attempting to make their way to Crystal Lake when the accident occurred. Parrish suffered head, knee and ankle injuries in the tumbling fall. There was no cellular service in the area, so his 16-year old brother and the friend eventually hiked back down to the Ingalls Creek Trail and then several miles back toward the trailhead to place the call for help. Parrish’s father stayed with him at the scene.

The 911 call was received by RIVERCOM dispatch at 7:04pm Saturday evening. A Chelan County Sheriff’s Office search and rescue coordinator requested a Sheriff’s Office helicopter crew fly into the area in an attempt to locate the subjects, while a Chelan County Mountain Rescue (CCMR) team prepared to deploy on the trail. There were no coordinates for the scene, as the hiking party did not have a GPS unit or similar device. Due to extreme winds aloft in the area, the helicopter was unable to reach an elevation to conduct the search. Two CCMR members met up with the 16 year old on the trail and began hiking back toward the drainage where the incident occurred. Due to darkness, it became too dangerous to climb the steep rocky slopes, so the team waited for daylight.

At 8:30am on Sunday, the CCMR team located the patient and his father on the slope. A Navy helicopter was requested for a hoist extraction. By 11:45am, the Navy rescue crew had arrived overhead and successfully hoisted Tristan Parrish, his father and brother to the aircraft. They were flown to Pangborn Memorial Airport in East Wenatchee. Tristan was then transported by ambulance to Confluence Central Washington Hospital in Wenatchee.